The Rest of Us Just Live Here, by Patrick Ness, answers the question of what the other kids are doing. You know, the ones who aren’t saving the world. I mean the kids at Sunnydale High school who aren’t who aren’t slaying vampires, and the guy in Mystic Falls who just wants to make it as a musician. I’m talking about the kids in Hufflepuff. This novel is about what’s happening meanwhile. It’s about what Mikey is doing while Satchel and Fin fight the Big Bad. 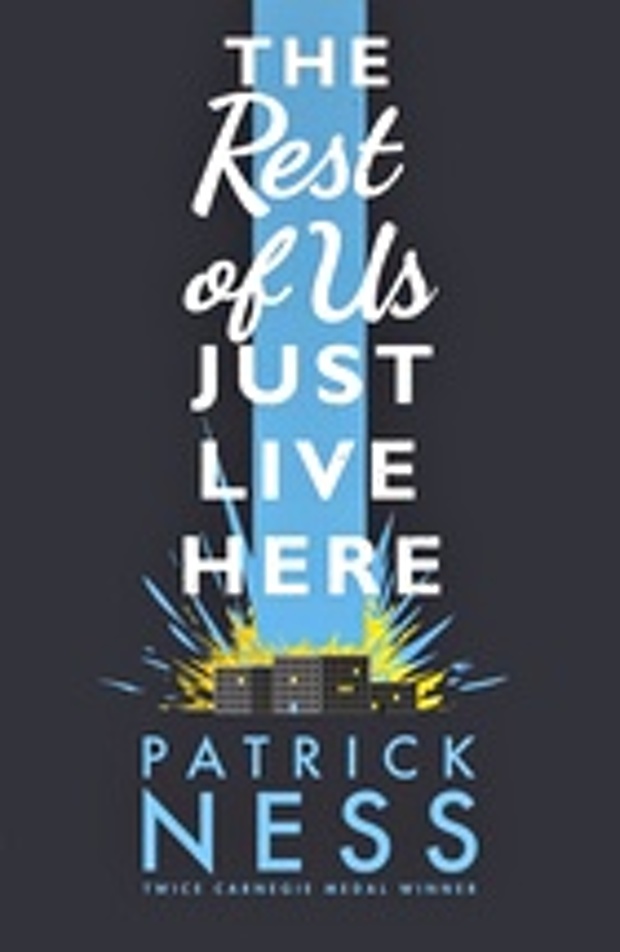 The Rest of Us Just Live Here, by Patrick Ness, answers the question of what the other kids are doing. You know, the ones who aren’t saving the world. I mean the kids at Sunnydale High school who aren’t slaying vampires, or the guy in Mystic Falls who just wants to make it as a musician. I’m talking about the kids in Hufflepuff. This novel is about what’s happening meanwhile. It’s about what Mikey is doing while Satchel and Fin fight the Big Bad.

Mikey is hoping that he can graduate before his high school gets blown up. Again. He’s waiting for his friend Henna to fall in love with him. He’s trying to regain his rapidly decreasing control over his OCD. He’s also trying not to become collateral damage in the next vampire/undead/soul-eating ghost attack to take over his town. 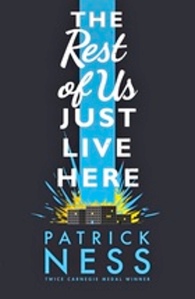 Other than that, he only wants to spend all the time he can with his friends – with Henna, Jared and his sister, Mel, before they all go their separate ways for college.

This book is a loving satire on the tropes of young adult fiction. The number one trope of course being the idea of The Chosen One: the girl or boy who has the natural ability at their fingertips to become the saviour of the world. The Katniss Everdeens, for example. Each chapter features a small summary at the beginning of what our Chosen One, Satchel, is up to. The rest of the book is dedicated to the Meanwhile.

The struggles Mikey and his friends went through felt so real to me. Mikey and his sister Mel both struggle with mental health problems. Mikey, like I mentioned, has OCD, and Mel is recovering from anorexia. The way that they support each other is beautiful to see. Their parents are kind of crappy. Their dad is an alcoholic and their mum is so consumed by her political career that it often seems like she only considers her kids in terms of how they will look in a press release. Despite this, Mikey and Mel have both somehow grown up to be remarkably caring and strong individuals, and their love for each other and their baby sister Meredith felt incredibly authentic to read. Patrick Ness did a really good job toward the end of the novel of ultimately humanising Mikey’s parents as well. In small moments he manages to take them from being The Absolute Worst to just… people. It is very hard to see parents that way, ever, let alone when you’re only eighteen, and the way Patrick Ness tackled it was so subtle. There was no stock happy ending in which I got the sense that from now on everything would be okay, but there was the hint of the beginning of progress. Anyone in a complicated family (i.e everyone) knows that sometimes that’s the best you can ask for.

The central theme of the novel was Mikey’s sense of importance, or perhaps I should say lack thereof. Mikey is a deeply insecure individual. He constantly feels like he is the least wanted. He believes he is the person who has the least to contribute to his friendship group, and that he is the most likely to ultimately be deserted by all of them. Reading about this made me super emotional, because this feeling is so common but honestly not one I have seen written about before. Insecurity is such a difficult topic to broach because to an outsider it so often appears completely nonsensical. And yeah – as a result reading Mikey could at times be so frustrating because he was unable to completely believe in and accept the love he was getting from his friends. He was so stuck in his own way he couldn’t see what was obvious – which was pretty much that, as far as friends were concerned at least, he was doing just fine. That is until, in his anxiety, he started pushing people away.

In doing this, Mikey discovers something pretty great about friends: They push back. Mikey’s relationship with Jared was one of my favourite parts of the book. Jared is a secret Chosen One desperately trying to be normal. His Grandmother was a God – the God of cats, to be specific – and a certain amount of her powers have been passed down to Jared. This mostly means that cats follow him around a lot. He also has a small amount of healing powers, but not really enough to do a lot with. He’s also very secretive, something that kicks Mikey’s insecurities into overdrive. They find each other totally frustrating, but also love each other like family, so they figure it out. Their friendship is complicated, but ultimately loving and supportive.

The Rest of Us Just Live Here is a book about complex, slightly broken, but always hopeful people facing their futures – that is if they can survive high school. Its light satire serves as the perfect antidote for YA trope sickness.

8 thoughts on “The Rest of Us Just Live Here”