Nobody ‘Bod’ Owens is the only living resident of the graveyard. He was brought up entirely by ghosts and his guardian, Silas, who is something else altogether. As far as Bod is concerned, his life isn’t so extraordinary.

In Bod’s world, there is nothing more scary in the graveyard than that which awaits him in the world of the living. See, Bod came to live in the graveyard in the first place when his entire family were slaughtered by the man Jack.

Bod was the only survivor, and the man Jack will never stop searching for him. 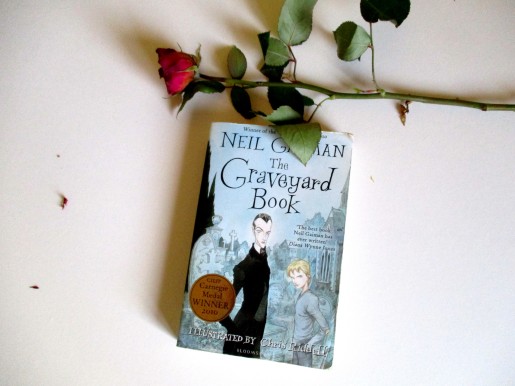 The Graveyard Book, by Neil Gaiman, is one of my favourite YA novels of all time. A book about ghosts, murderers and the long process of growing up, it’s a story that resonates more with every rereading.

I love a personal growth story. We all know this about me. The Graveyard Book has all the elements of a great coming-of-age novel with some supernatural bits thrown in for fun. As I mentioned already, Bod was brought up pretty much entirely by the dead. This comes with certain perks, specifically, some ghostly abilities of his own. He can fit through impossibly narrow spaces and fade into fog – with practise, of course.

The book has all the atmosphere you’d expect from a Neil Gaiman novel. I wanted to reach out and touch every scene even as the words slipped through my fingers.

Neil Gaiman is wonderful at telling a story in glimpses. Bod knows that it was something terrible that brought him to live in the graveyard, but it’s a vague and distant knowledge. It lacks detail. He knows that his guardian, Silas – neither dead or alive – is working to protect him, but he doesn’t know from what.

Silas leaves me wanting more every time I read this book. He is a perpetual mystery. He is a creature without category. Honestly, I think my love of Silas comes from a desire for a mysterious-yet-sexy mentor in my own life. Sigh.

Silas is Bod’s father figure. He’s his protector. He spends all his time trying to take down the threats that want to see Bod dead before he even experiences life outside of the graveyard. He’s emotionally unavailable (just how I like my men. Sigh. Again. Anyway. Again.) and though Bod knows that he cares for him, despite having known him his whole life, he has to admit to himself that he knows nothing about his mentor. He doesn’t even know exactly what he even is. Silas is Bod’s only real connection to the outside world. As a result there is a lot of frustration in their relationship (because Silas will never tell Bod what’s going on) and also this weird sort of premature regret because the unspoken result of Silas’ work, making the world outside the graveyard safe for Bod, is that Bod would then leave the graveyard. You get the feeling that Silas approaches he and Bod’s entire relationship through the lens of impending loss, and it stops them from truly connecting throughout the entire novel.

This is totally frustrating, but in a way that feels sort of good at the same time. We’re so used to characters laying it all out there after brooding around for a few chapters, the experience of never really knowing someone’s deal is actually very refreshing. That said I still hold out hope that Neil Gaiman might give Silas his own book one day.

Despite the whole graveyard thing, the central theme of this book is life, and its preciousness. The dead are full of tales from their lives, and Bod drinks them in. As the reader, every ghostly interaction serves as a reminder of the simple fact that life is finite. All the stories Bod can hear in the graveyard are past tense. They’re over. This makes you intensely aware of the not over-ness of Bod. He’s a real, living boy who can go out into the world and have adventures. He knows he’ll come back to the graveyard eventually (and doesn’t fear death at all, a concept entirely alien to me, being of the group of people who assume they are dying on developing a particularly severe headache) but before then he has his life, and he intends to live it.

‘There was a passport in his bag, money in his pocket. There was a smile dancing on his lips, although it was a wary smile, for the world is a bigger place than a little graveyard on a hill; and there would be dangers in it and mysteries, new friends to make, old friends to rediscover, mistakes to be made and many paths to be walked before he would, finally, return to the graveyard or ride with the Lady on the broad back of her great grey stallion.

But between now and then, there was Life, and Bod walked into it with his eyes and his heart wide open.’

3 thoughts on “The Graveyard Book”