Katie, seventeen, in love with someone who’s identity she can’t reveal.

Her mother, Caroline, uptight, worn out and about to find the past catching up with her.

Katie’s grandmother, Mary, back with the family after years of mysterious absence and ‘capable of anything’, despite suffering from Alzheimers.

As Katie cares for an elderly woman who brings daily chaos to her life, she finds herself drawn to her. Rules get broken as allegiances shift. Is Mary contagious? Is ‘badness’ genetic?

In confronting the past, Katie is forced to seize the present. As Mary slowly unravels and family secrets are revealed, Katie learns to live and finally dares to love.’ 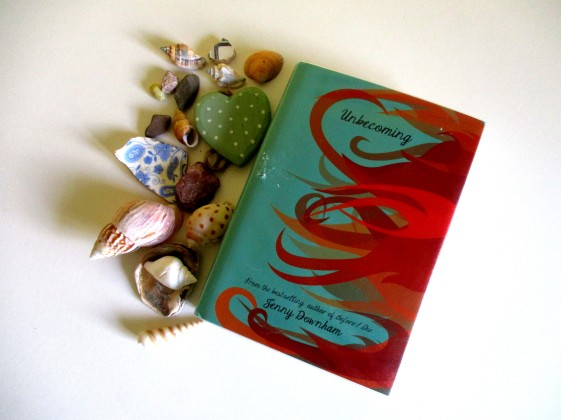 You know how I made that vow to avoid YA contemporaries for a while? I slipped and read Unbecoming by Jenny Downham.

It was a bad choice.

I was intrigued by the concept. Three generations of women in a family working shit out sounds like a book that could have been written for me.

As it turned out, not so much.

It has been a while since I loathed a protagonist quite as much as I did Katie. She is everything that I am sick and tired of reading: a whiny solipsist barging through a narrative that rewards her for epic self-absorption.

To be clear, it’s not that I didn’t buy into Katie’s problems. She’s recently moved to a new area with her mum after her parents split. Her mother is really overbearing and Katie feels like her entire existence revolves around a predetermined schedule as a result. She kissed her best friend, Esme and now none of the girls at school will talk to her. Then her Alzheimer-ey grandmother she’s never met is suddenly living with her and her already difficult mother becomes even more closed off than ever.

Anyone would be stressed.

But, honestly, she just didn’t have to be such a dick about it.

I found Katie’s relationship with her mother to be totally unrealistic. Downham painted Caroline as every bit the villain of the piece. Caroline doesn’t want her mother, Mary living with her. They have a complicated relationship. To put it simply, Mary abandoned Caroline when she was a kid, and Caroline, as a result has some pretty time-hardened feelings of resentment toward her.

Katie knows this, and yet still somehow spends the entire book demonising her mother for her feelings. Even when Caroline shares stories from her childhood that were upsetting – stories in which Mary is absolutely to blame – still, Katie shows her no sympathy. She engages with the grandmother she’s never met on a deep level pretty much instantaneously and yet she refuses to acknowledge her mother’s pain. I found it so frustrating to read.

Oh yeah, and Katie had this disabled brother who conveniently disappeared whenever the plot needed to move forward. This move – something I am seeing more and more in YA (looking at you, Isla and the Happily Ever After) pisses me right off. FYI, authors, using minorities as accessories isn’t helping anybody.

The other relationship in Katie’s life that made me want to tear my hair out, was with this girl called Simona. She’s the year above Katie at school and gay. As such, Katie decides to use her to experiment with her sexuality. Simona is a totally flat character. I’m pretty sure the only thing we find out about her throughout the entire novel is that she likes old movies. Her only purpose is to be the ‘experienced’ one for Katie to use and discard and she pleases.  While she’s messing with Simona, she also starts dating some guy who is so boring and irrelevant that I don’t even have the energy to check what his name was. Katie doesn’t really deal with any negative consequences as a result of all this.

Katie has no respect or regard for the feelings of other people. In her world, they aren’t even a consideration. When fundamental revelations come toward the end of the book, revelations that she spends a good 200 pages pushing for, she barely acknowledges them. It’s really bizarre. It’s not that she feels the revelations are disappointing – though they totally are, btw – she just doesn’t think about them at all, instead once again redirecting the situation so the centre of attention is once again on herself.