‘The leaves were cold and slightly clammy. There was no mistaking them. She had seen their likeness painstakingly sketched in her father’s journal. This was his greatest secret, his treasure and his undoing. The Tree of Lies. Now it was hers, and the journey he had never finished stretched out before her.’

When Faith’s father is found dead under mysterious circumstances, she is determined to untangle the truth from the lies. Searching through his belongings for clues she discovers a strange tree. A tree that feeds off whispered lies and bears fruit that reveals hidden secrets.

But, as Faith’s untruths spiral out of control, she discovers that where lies seduce, truths shatter. 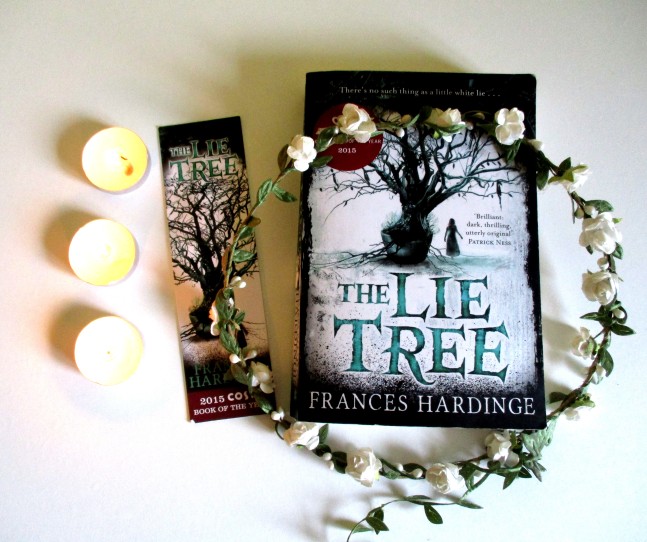 The Lie Tree, by Frances Hardinge, won the Costa Book of the Year award in 2015. Despite being named after a coffee shop chain of average quality (although one I am always very happy to see in a motorway service station), I get the impression that this is a big deal. It was the first young adult book to be presented the award. I have been meaning to read it ever since.

The Lie Tree is a nineteenth century murder mystery set against a backdrop of scandal in the scientific community. Faith’s father, the Reverend Erasmus Sunderly, is a famous scientist. He’s also cold, unaffectionate and secretive. So much so that Faith’s whole family are being forced to move from England to the remote island of Vane without having much clue as to why.

Well, Faith has a little clue. There are whispers of her father becoming caught up in controversy, but neither he or her mother Myrtle will reveal the nature of it.

I love books set in the nineteenth century. I spent a good chunk of my degree studying them. It’s an era that fascinates me. The Lie Tree pulls together some of the most interesting elements of the time to inform Faith’s story. As I said, Faith’s family are involved in the scientific community, which in the mid-to-late nineteenth century was rocked by the publication of Darwin’s Origin of Species. For the first time people were confronting the possibility that the history presented by the bible wasn’t the truth. Some of them – including Faith’s father, it turns out – weren’t dealing too well with this new reality.

A note on Faith’s father – he’s the worst. Seriously. Faith spends a lot of the book worshipping at his feet while it’s plain for the reader to see that he is an uncaring, selfish and detached individual. There is nothing redeeming about this guy. Also, even though the blurb tells us that he dies, it doesn’t happen until at least 100 pages in. I’m just warning you, because I was waiting for it to happen every time I turned a page.

Faith is a clever and engaged girl. In the nineteenth century, this was not considered a good thing. People thought that too much knowledge was bad for a young lady’s health. As a result, Faith leads a life of boredom and frustration that she can only ease by sneaking around building a body of scientific knowledge to rival her father’s – while nobody is looking, of course. She is constantly mentally chastising herself for failing to be the kind of lady that she’s supposed to be – the meek, uninquisitive side piece who is content to sit and drink tea on the side lines while the men dig pieces of history out of the ground.

The frustrating and small lives women were forced to live forms the central theme of the book. The lives of Faith and her six-year-old brother Howard provide a great contrast. While Faith is made to feel shame for her curiosity, in Howard it is praised and encouraged. Faith and her mother, too, appear to be opposites. Faith wants nothing more than to break out of her ascribed role and watches with horror as her mother protects her family using all those traditionally feminine traits that Faith cannot express herself. Her desperate search for a new husband after the death of the Reverend disgusts Faith, until she is forced to realise that her mother is simply trying to play the only game the world will let her. I would have liked to see Faith’s relationship with her mother developed more than it was. I felt she went from hating her to a sort of grudging understanding far more quickly than would have been ideal.

There were a lot of elements in this book that I really enjoyed. However, I did feel at times that the actual plot was a bit weak. Considering the book is named after it, I couldn’t actually see the point of the Lie Tree itself. It gave Faith small insights into the mystery of her father’s death, but mostly it just showed her nonsense. Ultimately, I didn’t think it was that remarkable of a thing, and that did undermine the plot somewhat.

I also wish that the mystery could have unfolded more slowly. I would have liked more hints to have been dropped throughout to indicate the identity of the murderer. Not because I wanted to guess – but because I wanted it to make sense. As it was their identity came out of nowhere. It didn’t give me the sense of closure that I was hoping for.

Overall though, the book is a good look at the struggles encountered by a group of women in the nineteenth century. It made the feminist in me very happy, if not the murder mystery lover.

3 thoughts on “The Lie Tree”