If, like me, you have started to look out the window first thing in the morning with a sense of impending doom; if when you think of the world you imagine, instead of a globe balancing on the back of an infinite number of turtles, more of a sinking ship that’s also burst into flames and about the blow any second; if you feel like you’re in the middle of an apocalypse in which instead of a zombie virus, people are infecting each other with hatred….

Mate: You really need to read this book. 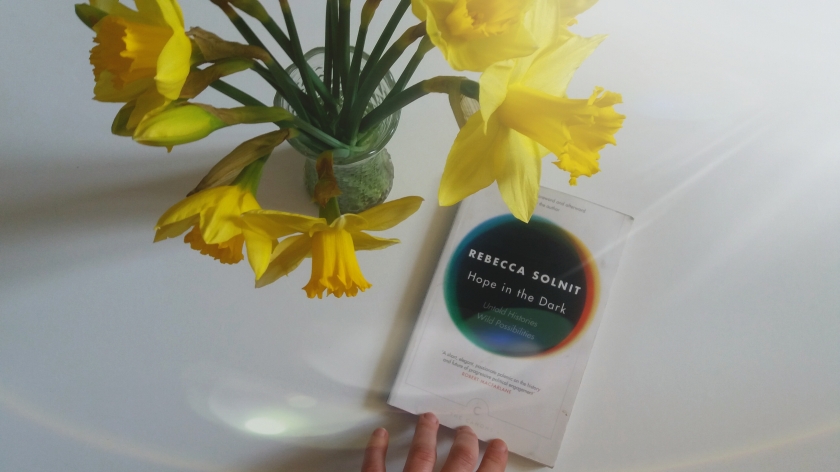 Hope in the Dark is a history of activism, of success and failure. Of persisting in the face of a power that seems much greater than your own. Rebecca Solnit writes poetically about post 9/11 New York, civil rights battles and local business vs international corporations among many things, through the lens of hope.

I think we all need a little of that at this particular moment.

Since there is nothing in this book I could possibly say better than Solnit already has, I decided to do this review in quotes:

The definition of hope:

‘It’s important to say what hope is not: it is not the belief that everything was, is, or will be fine. The evidence is all around us of tremendous suffering and tremendous destruction. The hope I’m interested in is about broad perspectives with specific possibilities, ones that invite or demand that we act.’

On functioning in the paradoxical world:

‘F. Scott Fitzgerald famously said, “The test of a first rate intelligence is the ability to hold two opposed ideas in the mind at the same time, and still retain the ability to function,” but the summations of the state of the world often assume that it must be all one way or the other and since it is not all good it must all suck royally. Fitzgerald’s forgotten next sentence is, “One should, for example, be able to see that things are hopeless and be determined to make them otherwise.”’

On protests against the Iraq war:

‘The dream did not last, though the moment is worth cherishing. Instead came the nightmares of burned and maimed children, bombed civilians, soldiers incinerated by depleted-uranium rounds, history itself wiped out when the United States permitted the looting of Baghdad’s National Museum and the burning of its National Library, US soldiers picked off a few at a time during the months of occupation and insurrection. The millions marching on February 15 represented something that is not yet fully realised, an extraordinary potential waiting, waiting for some catalyst to bring it into full flower. A new imagination of politics and change is already here, and I want to try and pare away what obscures it.’

On working towards that which you may never actually see:

‘There’s a wonderful parable by Jorge Luis Borges. In the last years of the thirteenth century, God tells a leopard in a cage, “You live and will die in this prison so that a man I know of may see you a certain number of times and not forget you and place your figure and symbol in a poem which has its precise place in the scheme of the universe. You suffer captivity, but you will have given a word to the poem.” The poem is the Divine Comedy; the man who sees the leopard is Dante.’

‘…women used to make sixty-six cents to the male dollar and now we made seventy-seven cents, so what were we complaining about? It doesn’t seem like it should be so complicated to acknowledge that seventy-seven cents is better than sixty-six cents and that seventy-seven cents isn’t good enough, but the politics we have is so pathetically bipolar that we only tell this story two ways: either seventy-seven cents is a victory, and victories are points when you shut up and stop fighting; or seventy-cents is ugly, so activism accomplishes nothing and what’s the point of fighting? Both versions are defeatist because they are static. What’s missing from these two ways of telling is an ability to recognise a situation in which you are travelling and have not arrived, in which you have cause both to celebrate and to fight, in which the world is always being made and is never finished.’

‘Activism is not a journey to the corner store, it is a plunge into the unknown. The future is always dark.’

2 thoughts on “Hope in the Dark”