Ariel Levy picks you up and hurts you through the story of how she lived believing the rules no longer applied – that marriage doesn’t have to mean monogamy, that ageing doesn’t have to mean infertility, that she could be ‘the kind of woman who is free to do whatever she chooses’. But all of her assumptions about what she can control are undone after a string of overwhelming losses.

Levy’s own story of resilience becomes an unforgettable portrait of the shifting forces in our culture, of what has changed – and what never can. 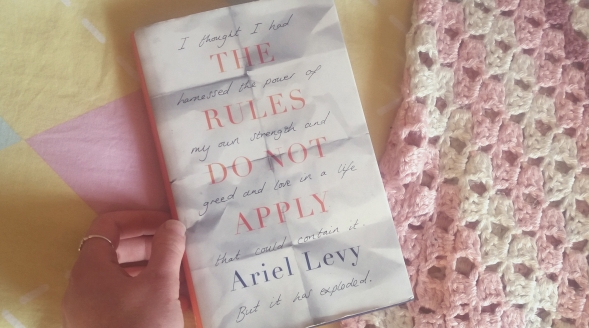 “I wanted what we all want: everything. We want a mate who feels like family and a lover who is exotic, surprising. We want to be youthful adventurers and middle-aged mothers. We want intimacy and autonomy, safety and stimulation, reassurance and novelty, coziness and thrills. But we can’t have it all”

I want to start this review with a sort of trigger warning. This book is ultimately about a traumatic miscarriage, and if that’s something you’re not in a place to deal with right now, I would recommend steering clear of The Rules Do Not Apply. Levy goes into the specifics of the experience in detail, and it’s hard to read.

The Rules Do Not Apply is an interesting take on the notion of ‘having it all’. Rather than look at the idea in terms of career, Levy uses her memoir to study the polarities within herself. As the quote above illustrates, her desires for excitement and comfort are frequently at war with each other in ways that are destructive to both states.

“I thought I had harnessed the power of my own strength and greed and love in a life that could contain it. But it has exploded.”

‘Life doesn’t ever go as planned’ is one of the clichés adults start rolling out around the time you turn fifteen and people start seriously asking you what you’re going to do with your life (which is such a joke anyway). It’s a throwaway comment most of the time, but others, advice someone is choosing to impart kind of desperately, like they want to go into more detail but they can’t yet.

Because they don’t know how it ends, I guess.

It’s the desperate I’m-seriously-worried-but-trying-to-keep-it-light version of ‘life doesn’t ever go as planned’ that hangs heavy over The Rules Do Not Apply. Levy foreshadows what she calls the explosion of her life, by referencing an evil she invited into it, an evil that began the gradual disintegration of her marriage and finished with her miscarriage.

Levy delves into a lot in this relatively short memoir. Times skips from her early twenties, back to childhood and forward to her thirties and her marriage. The skips are fluid and purposeful, the stories from her early twenties illustrate a young woman driven by the need for adventure, while the moments she picks to describe from childhood shed light on the decisions she makes as an adult.

She writes a lot about infidelity, both her own and that of her mother. She frames them both as women who feel stifled by domesticity and self-destructive as result. They are both torn between opposing desires for uncertainty and stability that neither of their lovers (or their spouses) turn out to be the solution to. She doesn’t shy away from the darker parts of herself, and writes interestingly on the experience of doing something shitty, recognising its shittyness and also her inability to stop doing it. It’s equal parts raking herself over the coals and accepting mistakes that cannot be changed.

The Rules Do Not Apply is a book concerned with grief. The big, overwhelming grief of losing her child, and her whole future as she had imagined it would play out. But it’s also the grief resulting from the gradual, painful dissolution of her marriage. Through infidelity, addiction and lies – both to each other and themselves – Levy and her wife come to realise that the life they thought they were building was a fragile and ultimately unsustainable one.

As predominantly YA readers, we read an awful lot of stories about falling in love. It makes sense – falling in love for the first time is an experience of many people’s teens (not mine, but that is another story #colddeadheart). There is something different but equally interesting to me in reading about a breakup, especially of a long relationship (I think Levy was married for around 10 years). There is a different sort of beauty in the snapping of the stitches people thought would hold them together forever.

We like to think that we can have everything. Some of us were brought up with the idea that it – everything – was owed to us. But that fact is, life is more complicated than that. The Rules Do Not Apply details some harsh realities and the resilience required to navigate them. It’s well worth a read.

One thought on “The Rules Do Not Apply”