Surviving a near fatal attack by a ghostly killer will leave its mark. Seventeen-year-old Rory Deveaux has painful scars and deadly new powers at her fingertips. But without her secret ghost-fighting squad she feels brutally alone. She’s lying to her boyfriend, failing in class and, worse still, Rory fears that a terrifying horror stalks the streets of London. 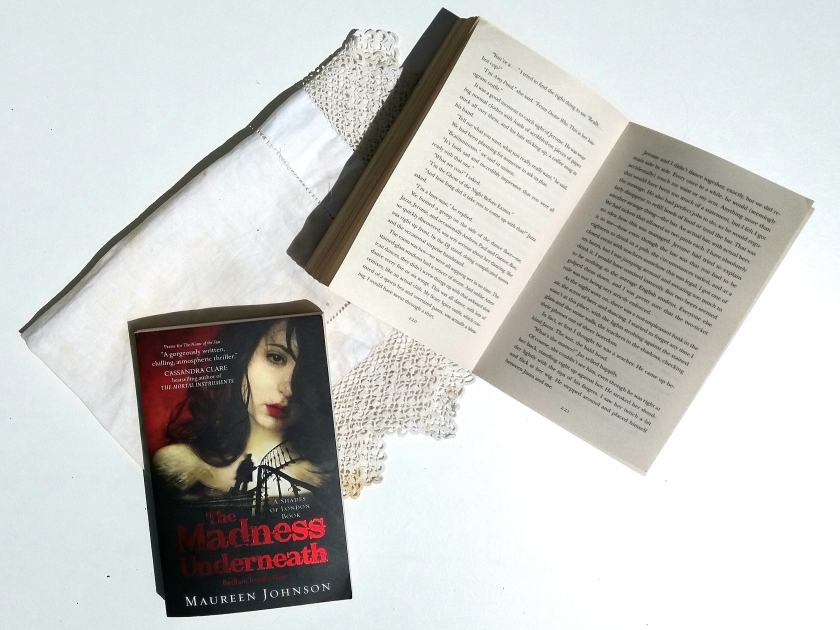 Turns out you can’t just deal with the ghost of Fake Jack the Ripper and be done with the spirit hunting scene. The Madness Underneath, book #2 in Maureen Johnson’s Shades of London series, finds Rory recuperating post-stabbing with her parents in Bristol (another British city, if you were wondering). After being pushed to sign the official secrets act in her hospital bed and removed from Wexford by her obviously traumatised parents, Rory has lost her only connections to her spiritual side: Stephen, Boo and Callum are incommunicado, and when – despite warnings not to from creepy government agents – Rory attempts to contact Stephen at his home, she finds that he, along with Callum and Boo, has vanished.

The first few chapters of The Madness Underneath have the feeling of 4 Privet Drive over the summer: nothing is going to happen until Rory goes back to boarding school. Which she does, weirdly, after the therapist she refuses to talk to decides to send her back to Wexford in a highly suspicious move.

#2 is a book of highly suspicious moves. But, honestly, when you’re trying to deal with the emotional trauma of your attempted murder by a ghost, as Rory is, you’re really too distracted by the simple tasks of getting through the day to worry about what your sketchy therapist(s) are up to.

If I learned anything from this book, it’s to pay attention to what your sketchy therapist is up to.

The Madness Underneath retains all the best elements of The Name of the Star. Rory, though much changed from the beginning of the first book, continues to be witty and indomitably herself, even as she comes to terms with the crazy turn her life has taken. Johnson maintains the interjections of third person narrative, many of them even more gory and chilling than before. Despite a slight tonal change – I would say that the sequel is definitely darker – The Madness Underneath avoids all of the worst second book mistakes. The plot is pacey and has a strong sense of direction throughout, even when we’re unsure where, exactly, it’s taking us. I never once asked: why am I reading this? a question I regularly find myself pondering during book #2 of a YA series.

If the first book was part cute contemporary, part murder mystery then The Madness Underneath is emotional trauma with a side of how to avoid joining a cult.

We see the life at Wexford Rory had started to build slipping through her fingers. Her grades are bad, she’s lying to everyone and ghosts keep distracting her when she’s trying to make out with her boyfriend. I think we’ve all had the experience of feeling disconnected from our lives, like we are an audience member to our own fuck-ups, able to do nothing but sit and watch while the life we thought we wanted crashes and burns. At this point in the story, Rory is at a crossroads. She can either try and put the Ripper business behind her and get on with her life, or she can throw it all away and embrace the ghost hunter life completely.

Also, in book #2, Johnson takes the ships to the next level. Something I really appreciate in all Johnson’s books, is that the first guy is very rarely the guy. Though Jerome is cute and all, and maybe if Rory hadn’t choked on her dinner and developed the ability to see ghosts they would have worked out (though I doubt it), throughout the series so far Rory’s life has changed into a shape that Jerome simply doesn’t fit.

Stephen, on the other hand…

It is a truth of growing up that quite a lot of the people you spent your younger years with were just your friends/romantic partners because they were there. You had school in common, and when you’re a kid that is pretty much the entire world. Then something happens – maybe you get really into kayaking or socialism, or you develop the ability to see the dead – and suddenly a new influx of people enter your life who you bond with like you never have before.

This is why I love paranormal YA. Through all the insanity, there is a core relatability to the characters that draws me in every time.

So: We have ghost hunting, breakups, ships and creepy government agents who might actually be okay people. What more could you want? Other than book #3, obviously.

2 thoughts on “The Madness Underneath”

I read a Neil Gaiman essay about Kathy Acker where he wrote of his first experience with her work, "I had no idea what I was reading, but I knew I loved it, whatever it was."
Just the right amount of murder and mayhem
"I missed her so much that I wanted to build a hundred-foot memorial to her with my bare hands. I wanted to see her sitting in a vast stone chair in Hyde Park, enjoying her view. Everybody passing could comprehend how much I miss her. How physical my missing is."
Lately I have fallen in love with the library again. I never fell out of love with it, exactly. I just like buying books. It might be an ego thing honestly, having shelves filled to the brim in a way that just screams Look At How Much I Read. But sadly my reading appetite exceeds the capacity of both my bank account and my bedroom, so necessity has driven me back to the stacks, where the choice is overwhelming, but exciting.
The lovely @readingwithsam tagged me in the #littlethingsthatmakemehappy challenge.
Finally diving back into Lisbeth's world...