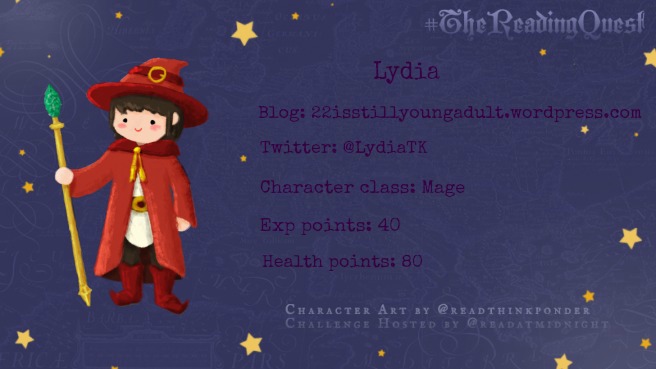 I read this for #TheReadingQuest, started by Aentee @ Read At Midnight with artwork by CW @ Read Think Ponder.

The Romans have long since departed, and Britain is steadily declining into ruin. The Buried Giant begins as a couple, Axl and Beatrice, set off across a troubled land of mist and rain in the hope of finding a son they have not seen for years. They expect to face many hazards – some strange and other-worldly – but they cannot yet foresee how their journey will reveal to them dark and forgotten corners of their love for each other.

Book number two of #TheReadingQuest, A Book Set in a Different World DONE. I finished this on Tuesday and am now progressing through book 3, A Book That Contains Magic, for which I’m reading The Bone Witch by Rin Chupeco. Full disclosure were it not for #TheReadingQuest it’s unlikely I would have finished The Buried Giant because 1. it was very boring, more on that in a minute and 2. I am not having the best week. My current mood cycles give me a couple weeks of fine followed by days of feeling like a total GARBAGE HUMAN but I signed up to this challenge and goddamnit I will finish no matter how much I want to watch Crazy Ex-Girlfriend while pondering whether I’m doomed to spend my entire life consumed with situations that are long since finished while also trawling through the Facebook pages of the people I disliked at university to see if I might be doing better than they are which OBVIOUSLY I’m not because as I already mentioned, I’m doomed.

Anyway. Ashley C Ford says it’s all going to be fine and I am choosing to believe her.

So, The Buried Giant by Kazuo Ishiguro is one of those literary novels that I tried to persuade myself that I liked while being bored out of my mind. The front pages are filled with snippets of reviews calling this story a masterpiece and I regret to say that as much as I kept waiting for it to suddenly hit me as such, it never did.

I have a weird relationship with Ishiguro’s work. Though I did think Never Let Me Go was a good book, it lacks – and I have also found this in his short stories though that is the extent of my knowledge of his work – the emotional payoff that I like to experience (instead of my own feelings HA) in my reading. While in Never Let Me Go that lack is kind of the point – after all you are supposed to spend the novel waiting for a moment that never arrives – in The Buried Giant, after wading through pages of exposition I felt somewhat cheated that even in the ending I didn’t get the moment of catharsis I had been waiting for.

The Buried Giant is set in a fictitious Ye Olde England in a state of tenuous peace after a bitter war between the Britons and the Saxons. Britons and Saxons live separately in settlements that they rarely venture out of for fear of the monsters roaming their lands. Ogre and dragon attacks are fairly regular occurrences. Life has been weird for an unspecified amount of time since something our MC, Axl and his wife Beatrice refer to as ‘the mist’ settled over the land and everyone lost their memories. Aside from occasional (and, if I’m being honest, narratively convenient) moments of scattered clarity, nobody has any memory of their lives outside of the present moment. One day Axl and Beatrice, who are both very elderly, remember that they have a son and become determined to find him and so set out on a journey to a distant village they know neither the name or location of, sure that is where he is living and that he is eagerly awaiting their arrival. Because of the mist, Axl and Beatrice seem unable to dwell on why they might have been separate from him for so long and we learn in bits and pieces the nature of Axl and Beatrice’s relationship with their son and receive hints as to why it ended in estrangement.

As the story unfolds and Axl and Beatrice eventually discover the source of the mist and how to rid their world of it and get back their memories, we learn more and more of what they have forgotten about their lives together. And yet, even as most of the truths that are revealed to them are tragic ones, particularly with regards to their son, these revelations come with none of the emotional payoff that you would expect. I felt nothing about this story despite my best efforts. I understood that it was about the problem of ‘amnesia’ on a personal and political level. The Britons and Saxons could only achieve peace if they denied their history of violence, and Axl and Beatrice’s relationship could only withstand if they refused to address the pain they had inflicted on one another during their long relationship. I got that. But I didn’t care about it.

The Buried Giant was not for me, and the adulation it has received leaves me with that bitter feeling in my stomach like I get when I feel as if I somehow missed something important.

3 thoughts on “#TheReadingQuest: The Buried Giant”

This weekend I got my first hours of reading in the sunshine this year. It felt good ☀️
I came to the whole morning routine thing backwards. Since *gestures wildly* my sleep has been all over the place, but for at least the last several months, I have settled into a pattern of waking up at 5am. Let me be clear, I did nothing to encourage this. My body decided it, and now regardless of what time I go to bed, around 5am I wake in a vaguely panicked state (again, cause... *gestures wildly*) and then my day starts. For a while I fought it. I lay in bed and stared at the backs of my own eyelids as the ubiquitous agitation we all feel rn gnawed away at me... until I just couldn't do it anymore. I started getting up. Then I was faced with the question of what, exactly, you do in the hours before 7am. For a while I just started work - something that turned out to be a very bad idea. Don't do that.
"I think we are well advised to keep on nodding terms with the people we used to be, whether we find them attractive company or not. Otherwise they turn up unannounced and surprise us, come hammering on the mind's door at 4am of a bad night and demand to know who deserted them, who betrayed them, who is going to make amends."
📚 New review
💕 Valentine's Day recommendations
Jude and Cardan from the Folk of Air series are one of my favourite toxic nightmare couples in a while. You know the dynamic I mean - in fiction it is fun and sexy but in real life an actual nightmare. Think Chuck and Blair from Gossip Girl, Klaus and Caroline in The Vampire Diaries and any coupling on Succession (Roman and Gerri 😂). Who are some of your toxic faves?