IMOGEN: is a runaway heiress, an orphan, a cook and a cheat.

JULE: is a fighter, a social chameleon and an athlete.

Imogen and Jule. Jule and Imogen.

An intense friendship. A disappearance. A murder, or maybe two. A bad romance, or maybe three.

A girl who is a… genuine fraud. 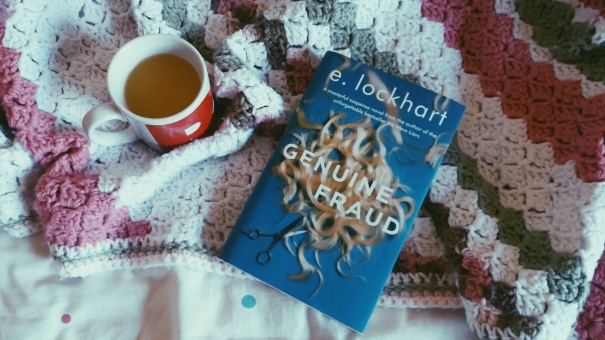 I adore E Lockhart. There are very few authors who have been with me as long as she has, and many of her books were very formative for my younger self. I picked up The Boyfriend List when I was in my early teens, and it cemented forever my love of contemporary YA fiction. A series about the heartbreak of broken female friendships, mental health and first love, it was everything I needed at that point in my life. Then she released The Disreputable History of Frankie Landau-Banks, which remains one of my favourite books to this day. The feminism, experimental writing – the way she manipulated language in that book really woke me up the possibilities of what writing can be – and complicated characters marked a shift in Lockhart’s writing career that she has expanded on in fascinating and often heartrending ways in subsequent novels.

Almost all of Lockhart’s work is concerned with female outsiders. Whether it’s Ruby becoming a social pariah after losing her boyfriend to her best friend, Gretchen Kaufman feeling like the only boring girl in art school or Frankie Landau-Banks tearing her boarding school apart proving her superiority to the boys who discounted her, all of her books are somehow concerned with women on the fringes – by choice or otherwise.

Then she released We Were Liars, and further built on her evolving writing style, creating a female outsider so alienated from everyone around her that even the reader didn’t realise she was lying to us until it was too late.

In Genuine Fraud, she’s done it again. Jule is perhaps the most unreliable narrator of them all, but unlike Cadence in We Were Liars, she isn’t trying to hide it. We know that Jule is a liar, it’s what she’s lying about that remains mysterious.

Genuine Fraud is a book told backwards, with fascinating consequences. To read it is to have constant whiplash, as every truth you’ve taken for granted is turned on its head, picked apart and then re-established as something else entirely. Jule tells stories about herself to craft an identity that she can live with, and has so completely assimilated with these adopted identities that it’s all but impossible to differentiate between the truth of Jule and the illusion she has thrown up for us and everyone else – but most crucially, for herself.

In her latest offering, E Lockhart has crafted yet another novel that keeps up guessing throughout. Her rejection of chronology creates a story filled with tension, manipulation and the occasional explosion of violence. It looks at how one snap decision to lie can change the direction of your entire life.

It’s quite an experience.