Garvie Smith is a smart kid. His IQ scores are way above his teachers’. He also has the worst grades of all the students in his school. When his ex-girlfriend Chloe Dow is murdered, it does nothing to help his disinterest in revising for his exams. Garvie Smith is determined to solve her murder.

Garvie Smith is a smart kid. His IQ scores are way above his teachers’. He also has the worst grades of all the students in his school. When his ex-girlfriend Chloe Dow is murdered, it does nothing to help his disinterest in revising for his exams. Garvie Smith is determined to solve her murder.

Detective Inspector Raminder Singh is a recently promoted police officer. He is not well liked. He isn’t mean exactly – just cold. He’s the type of guy who should be able to solve this pretty simple looking murder in within a couple weeks. Unfortunately it doesn’t turn out that way, and the police chief won’t get off his back as a result. If he doesn’t catch Chloe Dow’s murderer soon, his boss will demote him. And only adding to his woes is the persistent Garvie Smith, a rebellious teen he can’t stop from interfering with the case. 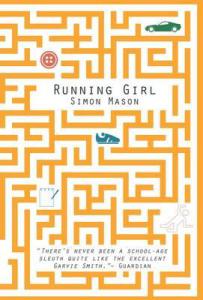 This book was a random pick for me. I don’t usually shop like that much these days. There is so much YA and so many reviews online, buying blind just seems careless.

After reading Running Girl, by Simon Mason, I think I am going to advocate picking up a book just cause you like the look of it every now and again. It was a relieving experience to go into a piece of YA fiction without the weight of the internet’s opinions already skewing my view of characters I am yet to get to know myself.

This book is a murder mystery of many layers. Chloe Dow was one of those girls that everybody wants to be. She was beautiful, talented and driven. She was popular. And yet, as becomes evident after her death, nobody, not even her best friend, liked her.

Garvie Smith didn’t like her either. He broke up with after only a few weeks. Not that anybody else knows that. As far as the world is concerned, Chloe Dow dumped him. Which is fine, Garvie Smith doesn’t much care what other people think of him.

Garvie was an intriguing character to get to know. He has a photographic memory, so he can retain pretty much all of the information he consumes in a matter of seconds. He is frustrating, in that he really, truly doesn’t give a shit. Throughout the book his mother is trying desperately to get him to engage with school, to quit going out so late and to stop smoking weed. He’s always promising his mum that he’s going to be better. And every time he breaks that promise. Often the decisions he makes that are hurtful to his mum are because he is pursuing Chloe’s murderer, but it’s difficult to watch how damaged their relationship is by Garvie’s actions. They don’t understand each other at all, and it’s difficult to see how their relationship can progress.

Garvie is also a total charmer. He’s the kind of guy who would have me giggling like a girl in a minute. He runs rings around DI Singh. He uses humour as a defence mechanism in a way that I find instantly attractive. The great and annoying thing about Garvie is that how much you can get to know him is limited. He keeps his feelings back, even from the reader, which can make his personality a little hard to grasp. For the longest time it’s difficult to tell whether he is pursuing Chloe’s murderer out of some feeling of obligation because of their short lived relationship, or if he’s doing it because he’s just… bored.

My only criticism of this book is also my usual: the female characters kind of sucked.

The objectification of Chloe was what ultimately led to her death. It isn’t a spoiler to say that the murder was a sex crime. Chloe’s value was intrinsically linked to her beauty. She wasn’t a complexly imagined girl, instead ‘just’ a beautiful one. And it was this idea that allowed the people in her life to dehumanise her into a figure they could stalk, harass, abuse and then kill when they were done with her. I felt like in this storyline, Simon Mason had a solid grasp of the ingrained misogyny that is at the root of such crimes.

But then all the female characters in his book were either represented as victims or they were sexualised out of a personality. Chloe’s best friend, Jess, is constantly throwing herself at Garvie throughout. He talks to her with a clear attitude of disgust until she gives him the information he wants, and then he rejects her. Garvie’s mother is a desperate figure, clinging to the remnants of the relationship with a son she is terrified of losing. Garvie has no respect for her authority, and as I’ve already mentioned, it kind of hurts to watch. There’s this other girl, Hannah, who I won’t talk too much about because she’s pretty important to the case, but she’s another where it’s all about her beauty. She’s another victim of circumstance. She’s another girl who needs saving.

This is going to be a series however, so I will hold on to the hope that the sequel will bring a complexly imagined girl to mess with Garvie’s world.

If I wander around the library for long enough I always find something that's been on my TBR for ages. I've been meaning to read Sisters ever since I heard Daisy Johnson on @litfriction 📚
Are you in a reading slump? Do you need a book with all of the SQUISHY FEELINGS? Yes? Then Emergency Contact by Mary H.K. Choi is for you. I steamed through this gorgeous YA even though I didn't want it to end.
Nova Reid is such an incredible anti-racism educator. After listening to the first season of her podcast, Conversations With Nova Reid, I knew this book was an immediate auto-buy for me, so I pre-ordered it months ago.
One Day came on my radar thanks to The High Low, a pop culture podcast by Dolly Alderton and Pandora Sykes (sadly it is no more). They were obsessed.
Mary HK Choi knows how to hit me right in the feels
🍂 September wrap up