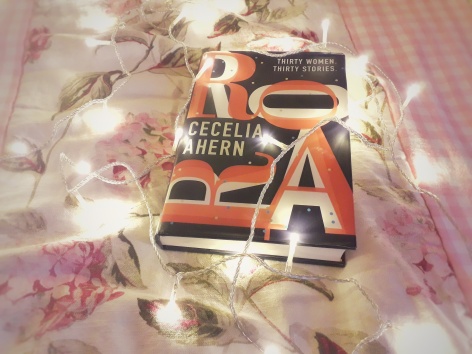 Roar, Cecelia Ahern’s short story offering is a selection of feminist tales that aim to explore the pressures, prejudices, joys and maddening frustrations of women’s lives. The stories weave magical realism into the modern day pressures of motherhood, marriage and aging in a way that was effective if occasionally a little contrived.

Overall, I found Roar to be a pretty mixed bag. I enjoy magical realism, but Ahern’s on the nose use of metaphor at times came across a little heavy handed. The first story in the collection, The Woman Who Slowly Disappeared sees a middle aged woman gradually vanish into nothing – making the point that women in middle age and beyond are ignored and maligned in society (particularly noticeably in the UK, where it’s generally accepted that women aren’t allowed to be on TV anymore once they hit 50). In The Woman Who Wore Pink, gender roles are enforced by a literal Gender Police that sees men and women fined and even imprisoned when they don’t adhere to the roles society has laid out for them. I’m not arguing her point, but there was a layer of subtlety missing in the collection that made me feel like she wasn’t so much showing me her opinion as bashing me over the head with it.

While overall I found this heavy handedness to be disconcerting, there were times when she used it to amusing and deeply satisfying effect. The Woman Who Guarded Gonads, about a world in which men have to appeal to a room of women to be allowed a vasectomy flips the narrative of bodily autonomy on its head and has men held to the same standards women have struggled against since forever. Lines like “And what about the lack of thought for the sperm? Why deny your sperm the right to life?” highlight the utter ridiculousness of the ‘pro-life’ position in a way that was as funny as it was cathartic.

What has left me so on the fence about this collection however was one particular story that left a bad taste in my mouth. The Woman Who Blew Away is the story of a millennial influencer who is obsessed with her Instagram likes, spends hours on her makeup, has plastic surgery and takes lots of selfies who one day “became so light, her head filled with too much nothing, she blew away”. This story was such an outlier – especially in such an overtly feminist collection – built on stereotypes, assumptions and the coding of things typically ‘feminine’ as stupid. In a book packed with complexly imagined women fighting guilt, insecurity and harassment this story of oh she likes makeup and cares about social media so therefore she must be stupid was a slap in the face. It felt very Rashida Jones #stopactinglikewhores level tone deaf and cast a bit of a shadow over the rest of the collection for me – and perhaps extinguished any patience I had kept for the aspects of Ahern’s writing that weren’t working for me.

While it definitely had some triumphant moments, overall Roar was let down by obvious metaphors and Ahern’s decision to give some women complexity and nuance while removing it from others.  It felt very feminism 101, which while still a good thing in itself, didn’t really say anything that was new to me.