Lady Helen Wrexhall is set to step into Regency Society and find a husband. But this step will take her from glittering ballrooms and the bright lights of Vauxhall Gardens into a shadowy world of demonic creatures and deadly power.

Drawing her into this underworld is Lord Carlston, a man of dubious reputation and infuriating manners. He believes Helen has a destiny beyond the ballroom; a sacred duty to protect humanity. Not the usual aspirations of a young lady in her first London Season.

A delightfully dangerous journey of self-discovery and dark choices, set against a backdrop of whispered secrets, soirees and high society. 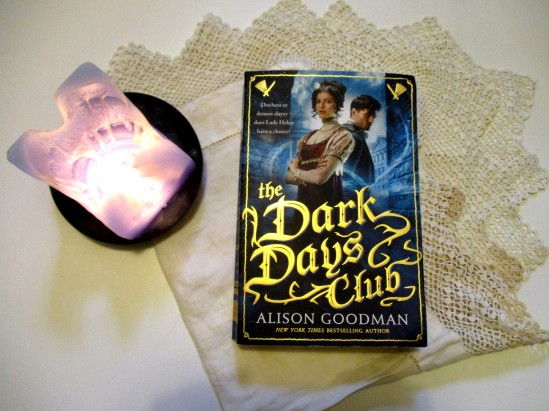 The Dark Days Club, by Alison Goodman was such fun reading. It contains so much of what I love: a nineteenth century setting, feminism, mystery and a gentleman of the sexy-but-dangerous variety.

I found this to be a refreshing take on the whole girl-finds-out-she’s-a-demon hunter story. This was mostly because Goodman sets up her restraints early – nineteenth century ladies can’t exactly pop out to slay a demon without their guardians noticing and pronouncing them ‘ruined’ (translation: unmarriageable) – and then plays within them.

Let’s break down what I mean by this.

To start, the pace of this book is super slow, which I know might be kind of turn off for some readers. I, on the other hand, savoured each revelation as it came. Rather than just being told that Lady Helen’s normality had been pulled out from under her – as so many books do – we instead were invited to study each piece as it was dismantled.

The pace of the plot was largely set by the limitations that define Lady Helen’s life. As in most books in this particular genre, Lady Helen is introduced to her demon hunter heritage by designated eye-candy (who is also her second cousin but I’m thinking we’re not supposed to mind because nineteenth century?  Mostly I just tried to keep that aspect of it at the very back of my mind) Lord Carlston. This is not easy for him to do because 1. No decent single Regency lady would be allowed to hang out with a man unaccompanied (gasp) and 2. Helen’s family have basically disowned him because there’s this rumour that he murdered his wife which is, I will admit, bizarrely pushed under the rug (like I wish the cousin thing would be) throughout the book. I guess we’re coming back to it later in the series. All of this means that he can’t mentor her like, say, Four mentored Tris because they can only speak to each other when they are invited to the same balls.

This made for pretty frustrating reading, I won’t lie. There would be times when Helen would arrange to meet Carlston and then her uncle (who is probably even more of a villain in this book than the horde of demons Helen has to confront) would arbitrarily decide she wasn’t allowed out that day, or her aunt would announce that Helen desperately needed to be fitted for a new riding habit or something. I really appreciated these details, however, as they made Helen’s experience something of a believable one. I don’t even live in the nineteenth century, but if I was called to be a demon hunter that would cause some serious problems in my life (I’m guessing no one would pay me? I work during the day. What if there was a demon? I can’t just leave! See? Issues). I like to see that stuff reflected in fiction.

Generally speaking, Goodman’s restraint is what I admired most about this novel. It surprised me, as a twenty-first century lady, that Helen wasn’t prepared to just let go of her life as it was before she joined the Dark Days Club and became a demon hunter. Before them, the only option in front of her was to go out and find a hopefully nice, hopefully attractive (although her uncle wasn’t especially bothered about either feature) guy to marry and hopefully be sort-of passably happy with. Even though she wasn’t enthusiastic about that prospect, and had in fact actively searched for ways out of it, including going to her brother for financial help, when first presented with an alternative future, Helen holds on to the proscribed path as hard as she can. I thought this was an interesting approach to societal pressure and internalised misogyny. Even after developing super powers Helen still understands that in the eyes of society – and a little, I think, of herself – her value can only be measured in terms of who she marries. She is afraid to step outside of the box she has been living in her whole life. She is afraid to leave everybody she knows inside it.

But ultimately, she doesn’t have much choice.

There is no question – I am absolutely reading the sequel to this one.

BONUS POINTS for mentioning real events and characters like the Ratcliffe Highway murders and Beau Brummel.

Additional BONUS POINTS for turning abruptly and awkwardly sexual about halfway through. I was into it.

I read a Neil Gaiman essay about Kathy Acker where he wrote of his first experience with her work, "I had no idea what I was reading, but I knew I loved it, whatever it was."
Just the right amount of murder and mayhem
"I missed her so much that I wanted to build a hundred-foot memorial to her with my bare hands. I wanted to see her sitting in a vast stone chair in Hyde Park, enjoying her view. Everybody passing could comprehend how much I miss her. How physical my missing is."
Lately I have fallen in love with the library again. I never fell out of love with it, exactly. I just like buying books. It might be an ego thing honestly, having shelves filled to the brim in a way that just screams Look At How Much I Read. But sadly my reading appetite exceeds the capacity of both my bank account and my bedroom, so necessity has driven me back to the stacks, where the choice is overwhelming, but exciting.
The lovely @readingwithsam tagged me in the #littlethingsthatmakemehappy challenge.
Finally diving back into Lisbeth's world...