This book was great. Andrew Smith uses Ryan Dean West’s immature but developing voice to navigate issues of sexuality, masculinity, misogyny and loss. He manages to do this while also being very, very funny. Not many books make me actually laugh out loud, but this one had me giggling with abandon even outside of the safety and seclusion of my bedroom. I laughed, by myself, reading, in public.

Winger, by Andrew Smith, is the diary of Ryan Dean West, fourteen year old genius who just landed himself in what his boarding school, Pine Mountain refers to as ‘Opportunity Hall’ for the semester. It’s where they put the bad kids, and Ryan Dean has found himself sharing a bedroom with one of the baddest: notorious school bully Chas Becker. As he’s been skipped ahead a couple grades owing to the whole genius issue, most of Ryan Dean’s friends are a couple years older than him. Generally, this isn’t a problem, apart from where Ryan Dean’s best friend, Annie – who he also happens to be madly in love with – is concerned.  When Annie looks at him, she only sees a little kid. Winger is Ryan Dean’s homemade school survival manual, complete with the hand drawn comics he uses to make sense of his life as it develops. 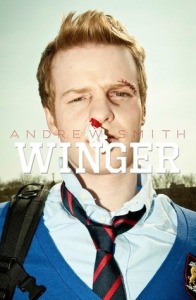 This book was great. Andrew Smith uses Ryan Dean West’s immature but developing voice to navigate issues of sexuality, masculinity, misogyny and loss. He manages to do this while also being very, very funny. Not many books make me actually laugh out loud, but this one had me giggling with abandon even outside of the safety and seclusion of my bedroom. I laughed, by myself, reading, in public.

A central theme of this book is the idea of masculine identity. One way that Smith dissects this is through Ryan Dean’s relationships with girls. Ryan Dean, like many teenage boys, spends most (pretty much all) of his time thinking about sex, and in particular, how to get sex. His interactions with girls are limited as a result, because he views them as sex objects. This attitude almost entirely messes up his relationship with Annie as Ryan Dean struggles to figure out whether sex with a girl is better than a relationship with the girl he has actually feelings for. Joey – Ryan’s friend, I am going to talk more about in a minute – points out to Ryan Dean that perhaps his quest for ‘a girl’ is part of what keeps ‘the girl’ (Annie) away. How is she supposed to trust a boy more interested in sex in general than women as individuals? Much of Ryan Dean’s journey throughout the novel is concerned with the importance of love and sex to his happiness.

Probably my favourite part of the book was Ryan Dean’s friendship with the aforementioned Joey Consentino, another resident of Opportunity Hall. Joey is the only openly gay kid at Pine Mountain. Initially, Joey’s sexuality makes Ryan Dean uncomfortable. He spends a lot of time dwelling on Joey’s sexuality, and what it means to him. He worries about his friendship with Joey being misinterpreted as something more, both by Joey himself and the wider school community. The better he gets to know Joey, however, the more he gets over his anxieties. At the start of the novel, Ryan Dean processes the idea of ‘gayness’ in the same way as he sees women: monolithically. Rather than – as he comes to (because Joey is the freaking best. As per usual, I fell in love with a guy I could never have…) – seeing Joey as the loyal, kind, funny, troubled, complex person that he is, he just obsesses about the fact that he likes boys. Ryan Dean’s friendship with Joey helps him realise that sex isn’t at the centre of everything. Love is.

In coming to understand the complexities in others, Ryan Dean really comes to know himself. When unthinkable heartbreak occurs, he has the tools to survive it. He understands that love will see him through. He learns that his masculine identity is complex, that it’s more than sex and beating on boys who disagree with you. It’s about imagining women complexly and having loving and platonic relationships with other men.

Winger is a wonderfully complex imagining of the mind of a teenage boy. Ryan Dean West is a frustrating, funny, immature but growing protagonist. His journey makes awesome reading.