If you broke Elena’s heart, Star Wars would spill out. So when she decides to queue outside her local cinema to see the new movie, she’s expecting a celebration with crowds of people who love Han, Luke and Leia just as much as she does. What she’s not expecting is to be the last in a line of only three people, to have to pee into a collectable Star Wars cup behind a dumpster or meet that unlikely someone who just might truly understand the way she feels. 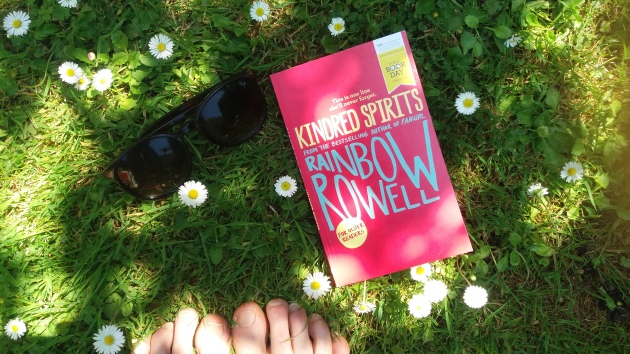 Kindred Spirits, by Rainbow Rowell is a charming celebration of geek culture and first romance of the kind of we have come to expect from the author of Fan Girl and Carry On. My only complaint was that, as a short story published for World Book Day 2016, Kindred Spirits is far too short, coming in at only 62 pages.

As in any good story by Rowell, Kindred Spirits is character driven, and even in the brief time we have with them, Elena and her line-mates, Troy and Gabe leap off the page. Elena is a sweet geek girl whose mother won’t stop driving past the line to check on her; Gabe, the aggressively anti-social Star Wars lover; and Troy, the line veteran who knows all the cinema staff by name.

What I have always loved most about Rowell’s writing is how she twists the expectations we have going into any given situation. Fan Girl isn’t your typical going to college story, and this line that turned out to be three people is not the days-long geek party Elena was expecting. It’s part rubbishing expectations and the detrimental roles they always play in our lives, part nostalgia for a time when, pre-internet, queuing for several days for a movie was the type of thing people would actually do.

In such a short span of time, Rowell manages to touch on absent parents, high school cliques, the unfortunate misogyny that lurks in nerd culture (the whole ‘fake geek girl’ thing) and the problems of peeing outside while female (the challenge is real).

If you’re looking to escape for an hour (and who isn’t?), and indulge in a world of nostalgia and nerd love, Kindred Spirits is the short story for you.

Are you in a reading slump? Do you need a book with all of the SQUISHY FEELINGS? Yes? Then Emergency Contact by Mary H.K. Choi is for you. I steamed through this gorgeous YA even though I didn't want it to end.
Nova Reid is such an incredible anti-racism educator. After listening to the first season of her podcast, Conversations With Nova Reid, I knew this book was an immediate auto-buy for me, so I pre-ordered it months ago.
One Day came on my radar thanks to The High Low, a pop culture podcast by Dolly Alderton and Pandora Sykes (sadly it is no more). They were obsessed.
Mary HK Choi knows how to hit me right in the feels
🍂 September wrap up
How far do you get into one read before you start fantasising about the next one...?