TRIGGER WARNING: There is an emotionally abusive parent in this book.

What if everything you set yourself up to be was wrong?

Frances is a study machine with one goal. Nothing will stand in her way; not friends, not a guilty secret – not even the person she is on the inside. Then Frances meets Aled, and for the first time she’s unafraid to be herself.

So when the fragile trust between them is broken, Frances is caught between who she was and who she longs to be. Now Frances knows that she has to confront her past. To confess why Carys disappeared.

Frances is going to need every bit of courage she has.

Engaging with themes of identity, diversity and the freedom to choose, Radio Silence is a tour de force by the most exciting writer of her generation. 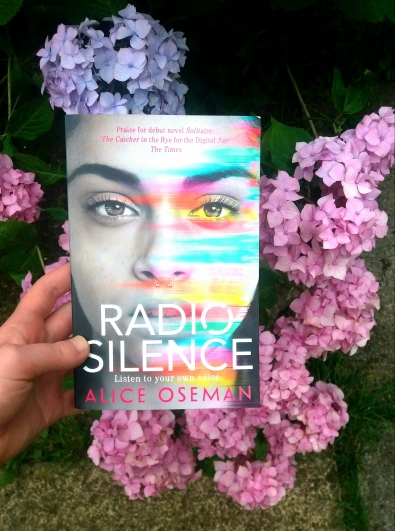 Radio Silence by Alice Oseman is a complicated world of inclusivity, art, heartbreak and abuse wrapped up in one of the most compelling coming-of-age stories I have read in a long time.

Can I be super honest about something? When I opened the book and read that Oseman is only 21-years-old, I wanted to hate Radio Silence. The fact of her set every alarm bell in my head screaming: FAILURE. But then I remembered that thing I read somewhere that said everybody is on their own timeline, and tried very hard to put it to the back of my mind. Like I have to do every time I read something written by Tavi Gevinson. Sometimes you have to love the thing more than the thing makes you feel bad about yourself, because if I had decided not to read this book, I would have missed out.

Radio Silence is a character driven contemporary that rejects the heteronormativity and romance that dominates the genre. It presents us with a familiar situation: outcast girl meets outcast boy, sets the scene for what we expect to be yet another epic teen romance and then denies us. Frances explains it best: “You probably think that Aled Last and I are going to fall in love or something. Since he is a boy and I am a girl. I just wanted to say – We don’t. That’s all.”

Oseman does this throughout the novel: she acknowledges our assumptions – of straightness and whiteness, etc – gives them some serious side eye, and then blasts past them in order to let her characters be their fully expressed selves.

This rejection of ‘traditional’ narrative is also apparent in the writing itself. Radio Silence is a book concerned with options and with identity and even the structure of the book demonstrates this. Each part of the novel is identified with a school term and that term is then separated into parts a, b, and c. It reminded me of an exam, where you get to choose whether to answer question a, b or c and was reflective of the way in which Frances, Aled and their friends were choosing which life to lead: one where they lived up to the expectations of their parents/themselves, one where they lived in the way they wanted to while appearing to live up to expectations of their parents/themselves, or one where they threw it all out the window and instead decided to live a life they really truly wanted.

Radio Silence also engages with online culture in a very authentic and satisfying way. The book is set around a Welcome To Nightvale-style podcast that Aled and Frances work on together, and through that story, Oseman analyses the positives and negatives of online life, particularly for those who have gained a following. On the one hand, we see a space where people get to express themselves and their identities in a way they might not be comfortable to do at school – Universe City, Aled Last’s podcast has a gender neutral narrator – but on the other, a world in which people receive death threats by strangers who have decided their identity is offensive. Oseman presents a volatile space and asks us to see the positive in it. After receiving a death threat, Aled tells his boyfriend that he’s demi-sexual, an identity he learned of online and that opened up an understanding of himself he had never had before. Negative offset by positive.

It’s an empowering read that resists tropes at every step from its dissection of the joys and heartbreak of platonic love to its unique take on intelligence in all its forms. You will finish Radio Silence with a little bit more hope than when you started.